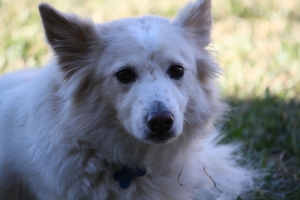 I had just lost my dog of 12 years to cancer and made the statement I wouldn’t have another dog unless God sent one to live on my porch. About a week after losing Andi I started noticing this dog running around the neighborhood. He seemed scared of everything. He hid in bushes and ran when people approached. Then one day he ran up to me, as though he had chosen me to be his.

I petted him and fed him, but I didn’t let him in my house or give him any reason to think he had found a home. But he stayed and he attached himself to me. 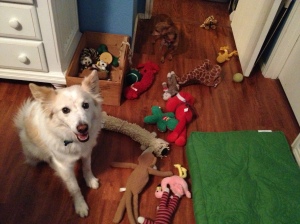 At the time I was working at a day habilitation center for adults with developmental disabilities. One of my clients asked if I believed when people or animals died they came back as someone else. I asked her why and she told me she thought Andi had come back as Freckles!

I can honestly say I’m not sure what I believe when it comes to an afterlife….but it certainly seemed like Andi (maybe in cooperation with a supreme being!) had a hand (or paw!) in directing Freckles toward me. I don’t think it really matters why Freckles chose me…I’m just glad he did!!

This post was inspired by Linda Arthur Tejera at Living With My Ancestors. After viewing her submission to Michelle’s Weekly Pet Share I learned she has a cat named Freckles. Her Freckles and my Freckles look absolutely nothing alike…but they are both really cute and really special!!