Her arthritic fingers gripped the arm of the recliner. She slowly lifted herself out of the chair and toward the window.
Her heart beat just a bit faster with excitement.
Was that her son’s car she heard?
Oh how she hoped it was him.
Is it a blue Chrysler? No, its a red Ford.
She slumped back into the recliner.
She stared at the light reflecting through the window. The brightness was misleading, the temperatures were dropping. Frost formed on the window pain.
“I’m sure the roads are getting bad, maybe he will come tomorrow.”
Maybe Tomorrow, a result of the Friday Fictioneer’s photo prompt. 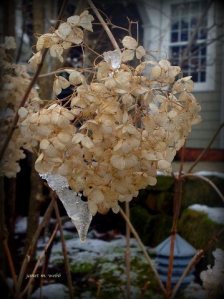