Each week bloggers from around the world share photos of doors. Old doors, new doors, short doors and tall doors.

I love this challenge and think of it often. Sadly many Thursdays fly by before I realize I missed yet another week. I actually downloaded my photos for this week’s challenge several days ago….and still I almost missed it! Fortunately Norm 2.0 gives us until Saturday at noon (Eastern Time) to get our doors posted and shared.

I tend to gravitate toward old doors, worn doors and even doors with no way of reaching them…like the two I am sharing today…second floor doors, without stairs.

Both photos taken in Snyder Texas. Hopefully both buildings are being refurbished and not just torn down.

If you would like to join the fun or just want to see a bunch of door photos stop by Norm 2.0 for a visit.

See the gray rectangle toward the top of the building?

I think it takes a special employee to clock in on time every day….when faced with this obstacle!!

If you like looking at doors, taking pictures of doors or climbing through doors…visit Norm 2.0 for Thursday Doors.

I’m really not sure why I didn’t post this photo six months ago. I took the picture with Thursday Doors in mind. I was vacationing in Chelem Yucatan, Mexico last December.

This is the front door to my friend’s house. Steve and Su had the door custom made out of “cedro” (cedar) by a local carpenter.

The gate was also custom made by a local welder.

If you love doors or just love looking at other people’s photos – visit Norm 2.0

Grand Prairie is one of many areas referred to as the mid-cities in the Dallas-Fort Worth Metroplex. Recently I happened to be in Grand Prairie for work. As I drove down Main Street I noticed a marquee in the distance. I am always attracted to old theater marquees. And the Uptown Theater did not disappoint. Now that I know it exists I can’t wait to catch a show.

The marquee caught my eye. But when I stopped to take a photo, I noticed the doors. 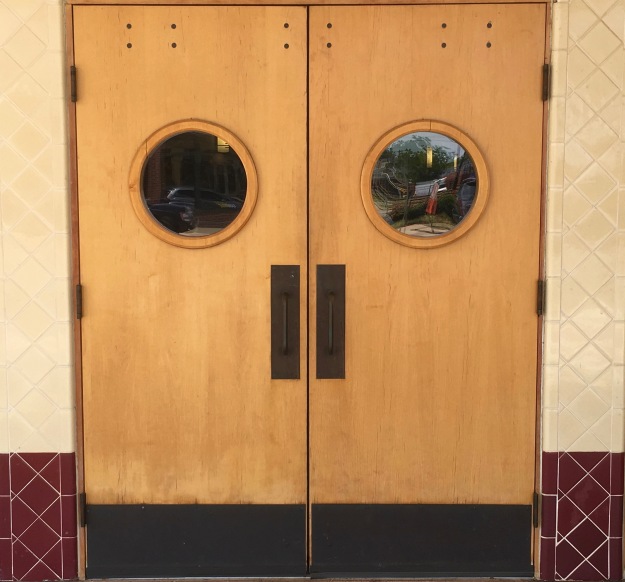 The doors remind me of the movie house era, when tickets cost a quarter.  (Not that I remember those days!)

If you enjoy doors…visit Norm 2.0

Merida, Yucatan – I wish I could’ve walked through many of these doors – to explore what lay beyond. Well maybe not the Cirujano Dentista door! 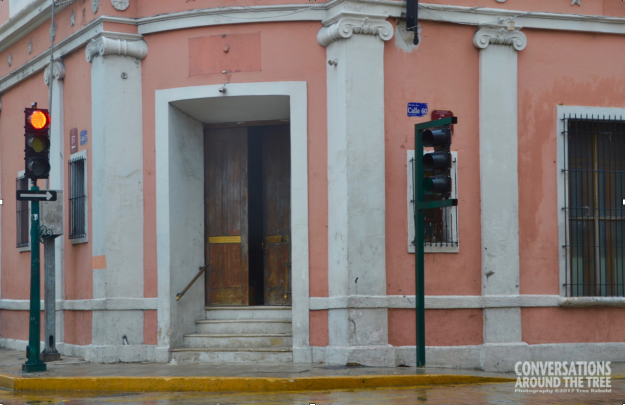 Here are a few doors I saw while in Yucatan, Mexico

Since finding this challenge I have learned something valuable about myself. I love two types of doors.

One: the entrances to large beautiful churches

St. Mary’s of the Assumption – Fort Worth Texas 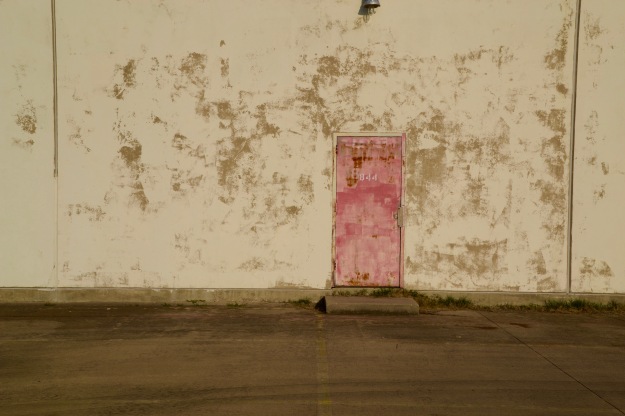 It seems I might have missed the middle ground!

I seem to be drawn to abandon buildings, broken windows and any roof with a hole. I also like a door with a lot of history. When I saw this building and this door, in Snyder, Texas I had to stop and take a few photos.

The St. Ildephonsus Cathedral in Merida, Yucatan was built during the 16th Century. 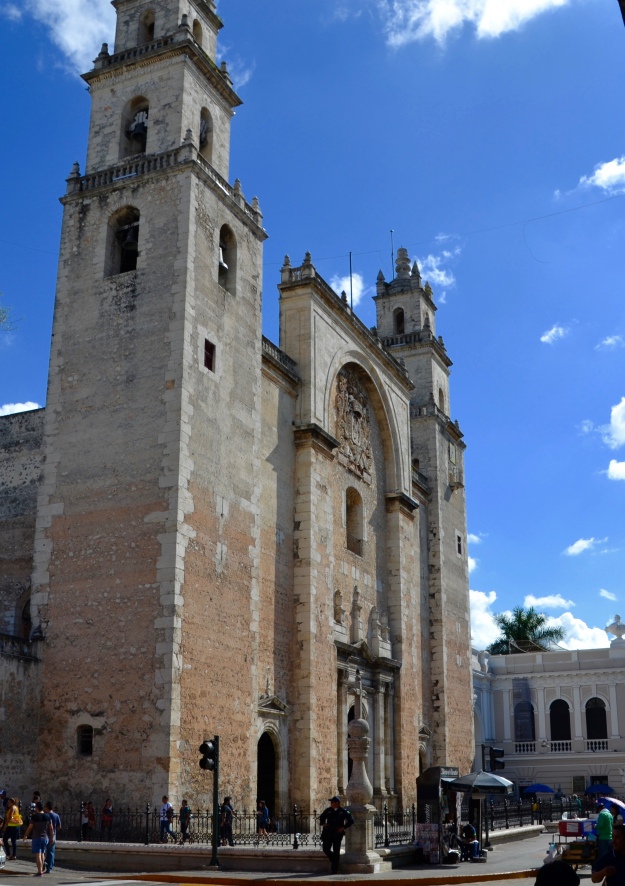 So much of the architecture in Merida is beautiful, but sadly has a haunting history. The Cathedral, for example, was built on the ruins of the Mayan settlement Ichcansiho. The buildings of Merida, including the cathedral, were built by the Mayan people after they were enslaved by the Spaniards, their conquerers.

Notice the five slits below the window? Those slits were created as a method of defense, so the Spaniards could shoot the Mayans if they attempted to overtake the cathedral.

The main door of the Cathedral is known as “The Door of Forgiveness.” It is flanked by statues of Saint Peter and Saint Paul. But I must say to me it looks more like the door of a fortress than the door of a church.

We recently vacationed in Yucatan Mexico. I got so excited about the variety of doors I told my friends about Thursday Doors, hosted by Norm 2.0, and commenced taking as many door pictures as I could.

I think I will have enough to last several months! 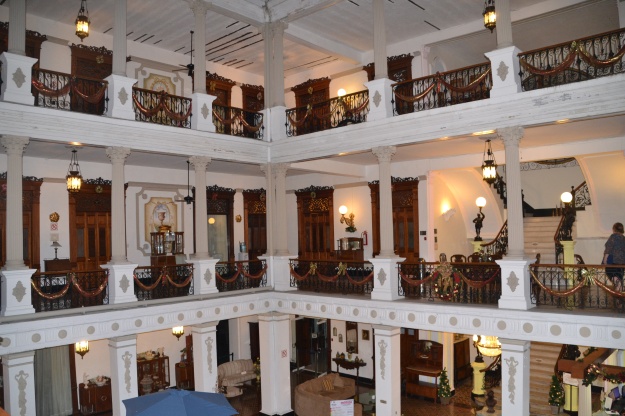 The first night in Yucatan we stayed at Gran Hotel in Merida. The hotel was built in the mid 1800’s. I could have stayed there for the entire week. The classic architecture, old world charm and kind staff members made our stay quite enjoyable. 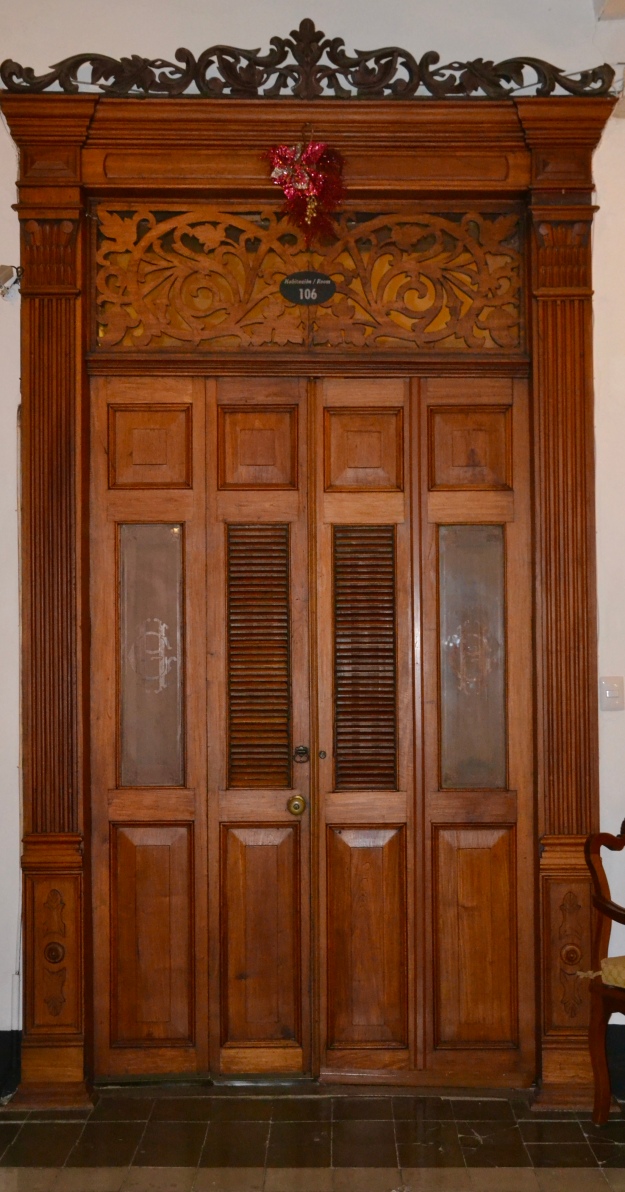 If you would like to see more doors from around the world visit Norm 2.0