I learned a valuable cycling lesson this morning.

Tina and I were visiting family in West Texas. I decided this morning to take a bike ride. In West Texas many of the roads seem endless. They are straight and may go 50 miles without a turn or even a town. 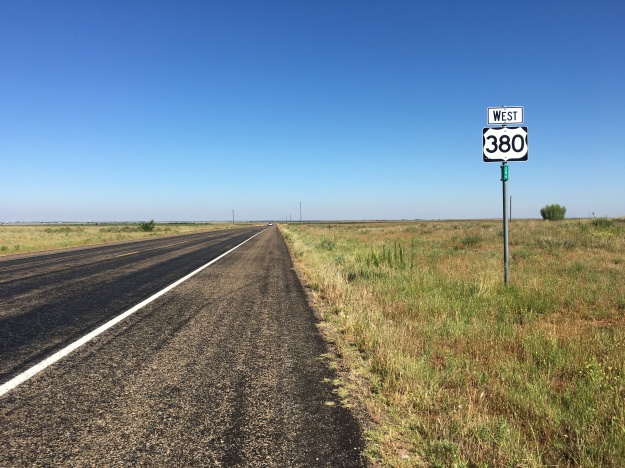 I told Tina which State Highway I planned to ride and in which direction. I also explained that I would ride out for an hour…turn around and ride back….obviously I would be gone for 2 hours.

As I headed out of town I felt great. My pedaling was smooth and my pace was consistently faster than usual. I averaged 17.3 to 20.1 MPH for the first 20 miles. I convinced myself the reason for the fast ride was the flat road and smooth pavement.
My 1 hour “out” was up at the 20 mile mark, so I crossed the road and headed back toward town.

As soon as I turned around I realized it was the tailwind that carried me twenty miles…and it would be the headwind I had to fight all the way back to town.

What took me an hour to ride with tailwind….took me one hour and 40 minutes to ride against the headwind.

A lot of self talk was required to keep me pushing against the headwind.
Same beautiful scenery, as the ride out…just look across the fields.
Be grateful you get to ride.
relax
quit being a wimp!
Just keep pedaling

I did finally make it back and I did acknowledge how fortunate I was to spend time riding and I did enjoy the fields and fields of unending farm land.

However, the next time I ride my bike in West Texas, I will check the direction of the wind (because there is always wind in West Texas) before determining which route to take.

This past Saturday I rode 67 miles on my bike. This was in preparation for my first 100 mile ride (AKA Century ride) that will happen this coming Saturday.

Prior to becoming a cyclist, I thought cyclist were rude and unfriendly. Frequently on the trails they would fly by without warning and act as if it was the walker/joggers fault if there was a close call.

Since I joined this “club” of cyclist I’ve changed my opinion of those crazy bike riding people. For one, I understand the frustration of trying to share a trail with people that think nothing of spreading out across the path and not pay attention to the bikers trying to “pass on the left.” I’m not saying I think its right, I just get it.
The other reason I’ve changed my mind is, most of the cyclists I’ve met are really nice, helpful and passionate about their sport.

During the ride Saturday a gentleman rode up beside me and I complimented his bike. It was a really cool bike. Come to find out he built it himself. Over the next five miles I learned his occupation, his wife’s occupation and the occupation of both his daughters. I shared my line of work then I learned we both ride for health because we have both lost too many family members to heart disease.

Every group, hobby, or activity has its own code words, acronyms and maybe even handshakes. And overtime I have learned that despite being intimidated when first joining a new activity or group it always works out okay.

This biking thing has certainly worked out quite well. I’ve met good people, learned about a new sport and hopefully I’ve gotten a little healthier. I will never understand the guys that can ride a 25 MPH pace…but I’m thankful for biking all the same.

Thank you random stranger for the reminder….

I went for a bike ride today. I took a new route and ended up going farther than I had planned. After conquering several challenging hills I decided to stop at a gas station to buy a Gatorade. As I stood outside filling my water bottle a man walked by and said, “Nice day for a ride.”
I responded, “Yes, if it weren’t for the headwinds.”
He quickly replied, “It’s February!”

I immediately realized he was right. Why in the world was I complaining about some headwinds? The reality was, I was out riding on February 20. Layering was not required, only shorts and a t-shirt. It was a perfect spring day…in February!

Thank you random stranger for the reminder to see the positive!